in Live Poacher News · by vapu · 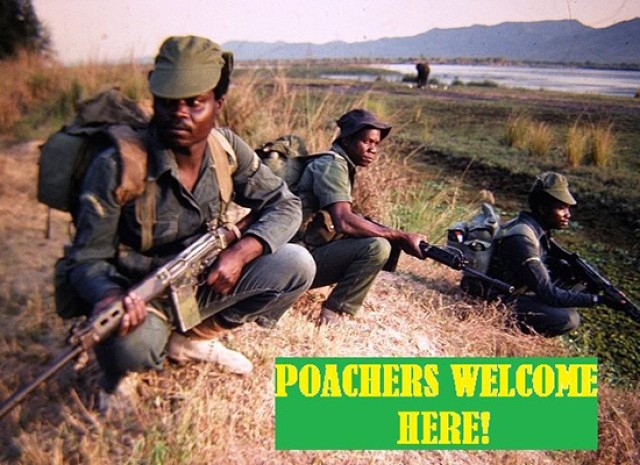 Article from – The Chronicle: Victoria Falls Reporter
POLICE in Victoria Falls have recovered 37 elephant tusks weighing a combined 680kg valued at about $200,000 following a shootout between suspected Zambian poachers and game rangers. A rifle and 20 rounds of ammunition were also recovered in the Kazuma Pandamasuwe forest, police sources said yesterday.

Game rangers from the Zimbabwe Parks and Wildlife Management Authority and the Forestry Commission detected spoors last week and tracked the suspects who on spotting the tracking team opened fire resulting in the exchange of gunfire.

The officer commanding police in Victoria Falls, Chief Superintendent Jairos Chiwona said they had since launched a joint operation with their Zambian counterparts to track down the poachers.

According to Zimbabwe Parks and Wildlife Management Authority, about 30 suspected poachers invaded Hwange National Park and Zambezi National Park where they killed a number of elephants on two occasions last week.

One suspected poacher was shot dead while the other is battling for life at Victoria Falls Hospital after being shot by rangers.
“I confirm there was contact between poachers and officials from parks and forest departments in Siamnungu, about 8km from Zambezi River.

“The rangers picked some spoors and tracked down the poachers and when the poachers realised they had been cornered, they opened fire resulting in an exchange of gunfire,” said Chief Superintendent Chiwona.

He added: “During the shoot out one poacher was shot dead while the other was injured and is in hospital under guard. We have confirmed that they are Zambians and we are jointly investigating the case with our Zambian counterparts.”

Chief Supt Chiwona said there were no casualties on the part of the rangers.
He said they suspected the syndicate involved a large number of poachers judging by the recovered loot.

Some of the poachers were each sentenced to 15 years in jail.